When Admiral Percy’s daughter, Sophia, married Colonel Charles Bagot in 1846, he persuaded her to destroy her journal which she had kept for many years. Fortunately, she had an excellent memory and so, in 1901, her book, Links with the Past was published. It gives a vivid picture of her early recollections of her father and his life in the Navy. In addition, it also gives fascinating glimpses into life in Rickmansworth when the Percy family lived at Scotsbridge House at the bottom of Scotsbridge Hill. 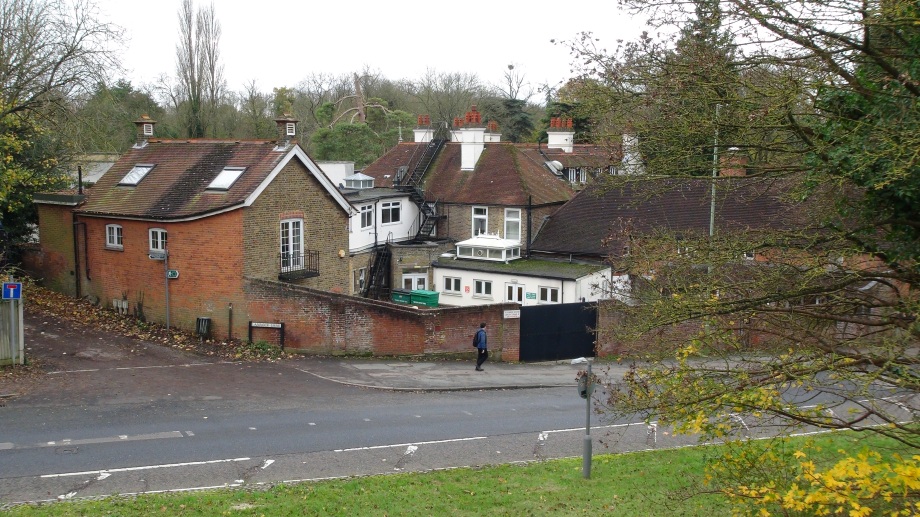 The Coming of the Railway

The excitement caused by the opening of the first railways seems inconceivable these days. I saw the first train start from Watford, on the London and North- Western line. Country gentlemen vowed it was the ruin of the country; that not only would they themselves never travel by railroad, but that no parcels or goods should ever come to their houses by it, but only by coach or canal.

The good old Tories, to whom I by birth belonged, deplored the levelling tendencies that, in their opinion, the contact with the lower classes at railway stations was sure to bring into society.

(The London to Birmingham line, through Watford, opened in 1837)

No one who did not live in the days of the First Reform Bill can imagine the excitement in the country. Duke Hugh (Northumberland) wrote to my father asking him if he would come to Alnwick Castle with all his family. The Duke had made arrangements to arm and provision the castle as if for a siege, if serious riots or revolution occurred.

After the Bill was passed, Rickmansworth, the little village near Scotsbridge, was illuminated- only Scotsbridge and the Vicarage refused to join in the rejoicings. The mob forced their way into our backyard, saying that if Captain Percy would not illuminate they would break all the windows and force their way into the house through the servants’ offices. We and all the servants were gathered by my father’s orders in the front hall. My father loaded his pistols and sent the mob word that he would shoot the first man who crossed the threshold. No one ventured to do so, and, after hooting and yelling, the mob departed to the Vicarage where they ordered the Vicar to illuminate and give them up the keys of the church, in order that they might ring the bells. The poor Vicar was so frightened that he ran up to his bedroom and the keys of the church out of the window. I remember to this day the feeling of disgust with which we heard the merry peal of the really beautiful bells of Rickmansworth.

We passed an uncomfortable night with our broken windows, but we had not, like the Vicar, hauled down our colours.

(The First Reform Bill in 1832, which was the source of so much terror, introduced  what would seem to be very minor changes to the Electoral system.

‘Rotten Boroughs’, those which had only a handful of electors were to be abolished. Large industrial towns, such as Manchester, which had previously not been represented, were now to have MPs.

This led to considerable unrest, with riots in several major towns, such as London, Bristol, Birmingham and Nottingham.)

I wish I had written down the prayers of an old woman I knew who rejoiced in the name of “Puddifoot.” They were long verses, which she said she recited every morning and night. They were not about God or religion, but about lambs and green fields, and I suspect of great antiquity.

She used to reckon time as so many months or years before “the Sally-come-o’er-us” visited or left England. This, I at last discovered was the cholera which in 1830 visited Rickmansworth.

(From the censuses it can be seen that a number of families with the surname ‘Puddifoot’ lived in Rickmansworth in the nineteenth century.)

Taken from Sophia Bagot’s book, ‘Links with the Past’